When Vista Ridge Middle School cross country runner Payton Szemett started the race at the Zone Meet, she knew quickly that she was injured, but she was determined to complete the race, and she did just that with the help of the rest of her team and supporters from her school.

Szemett said she felt like she had overstretched a muscle the day before during training, but before the race she felt fine. Once the race began, she felt the pain again. It wasn't long though before she felt the encouragement and support from her team.

Eighth grader Emma Jenkins said that she feels like cheering during a race can really affect a runner's outcome and mental state. The teammates saw that Szemett was walking, and Callie Seiwert, also an eight grader on the team, said they've been taught that it's always important to help teammates and decided that in order for her to have a positive memory of the race, they would join her. 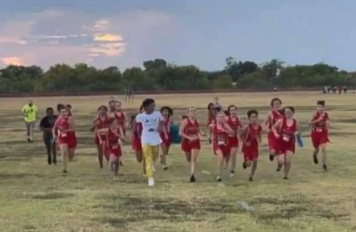 "When they started to run with me, it made me happier and more confident," Szemett said. "Every time they would say something, it would make me laugh and help me go faster. It made me feel happy that everybody cared about it and that everyone was there for me when I needed it."

Once they were together, Szemett began running.

"There was only one runner running with her at first, about halfway through the race, but as more and more people joined, she got faster," Seiwert said. "She knew that, 'They are cheering me on. I can do this. I can finish this race!'"

Melissa Benjamin, or "Benji" as many call her, is the VRMS Girls Cross Country Coach said that she's always hoped that her athletes will grow up to be good people.

"A couple years ago, when we started our program, our mentality was, 'We might not be the fastest, but we will run honorably, and be known to help others.' Over the years, that mindset has been ingrained in the program," Benjamin said. "When I saw my injured runner at the end of the race, my athletes knew she needed help. By the time Payton got towards the finish, I looked up and the whole team was running towards her so she would know that she was not alone. What that showed me was that my kids had not only kept the culture of the previous runners, but that they would keep it going. When I saw the team coming around, I was beaming with pride!"

Fellow VRMS Teacher Jason Cornelius was at the race to cheer on his students, and said that what happened at the meet was a reflection of their coach's leadership and the values she has instilled in her students.

"Benji is one of the most selfless, hard-working people I have ever met," he said. "She pours her heart and soul into her students and they love her for it."

The moment was definitely a lasting memory for not only Szemett, but the whole team and everyone who witnessed the act of kindness.

"When we came across the line together, it felt like all the hard work we put into the season paid off," Jenkins said. "The whole season was in that one moment. It was something special."

After the race was over and they had all crossed the finish line, the whole team plus parents, teachers, and friends broke out of the hudde together as one.

"It felt like we were all a family," Seiwert said. "We didn't all know each other well, but we are all Vista Ridge, and we will be there for each other, push each other, and celebrate each other!"