From The Talon's initial feature:

Since 2019, TCTV has been producing Spanish-language newscasts nearly monthly. Though the episodes will continue, the stories covered will also be posted on Timber Creek Talon in their native language.

“Spanish News has been a long-time project for us at Talon and TCTV,” Student Media Adviser Greg Janda said. “We’ve been fortunate to have John Gutierrez as a leader for Spanish-language news on TCTV since January 2019, and though we were delayed by the pandemic, we’re very happy to make more Spanish-language content available on Timber Creek Talon.”

“The goal for the broadcast has always been to inform others on news and events pertaining to the interests of most Latin-Americans and Hispanic people,” Gutierrez said. “But some personal goals I have for the newscast is to enter it into one of the many journalism competitions and possibly win some sort of award.” 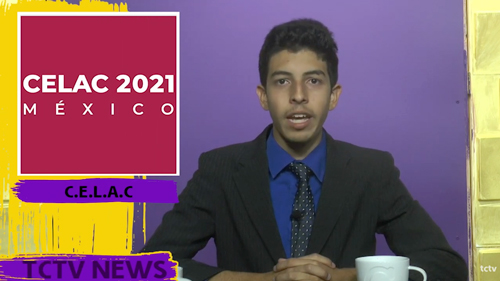 Gutierrez came up with the idea during his Sophomore year of school, the first year he was with TCTV. The process continued as he learned new skills in editing, writing, and anchoring.

“I wrote what I would call the rough pilot script for my Spanish news, I then sat on it until December cause I was nervous to show it to Mr.Janda. When I finally showed it to him he approved it and asked me if I wanted to record it. I told him no, and that I would make a better script for next month. Then January came around, I made a script and recorded my first show, what I consider to be the pilot,” Gutierrez said.

Another element to the decision to expand coverage was demographics — in 2019, 23 percent of Keller ISD students identified as Hispanic and multiple campuses, including some in Timber Creek’s feeder pattern, have percentages as high as 47 percent Hispanic.

“Part of Talon’s mission is to serve the Timber Creek Community, which includes our native Spanish speakers, emergent bilingual students, and their families. Including stories that are selected, written, edited and produced by Latin-American students helps us not only make sure the content is useful, but also authentic to what matters to those groups,” Janda said.

Though the program has been a labor of love and representation for Gutierrez and TCTV, the team is looking for more Spanish-speaking journalists to contribute.

“I’ve been making these newscasts all by myself these past three years and I would love to keep seeing TCTV’s Spanish news after I’m gone but at this current moment the future of TCTV’s Spanish news is uncertain,” Gutierrez said. “What I am certain of is that at least for the rest of this school year there will be a new edition of Spanish news every month.”

Gutierrez has dedicated much of his time to this project – he writes the scripts, compiles the news, edits the videos, and makes the graphics all himself, but he had a strong support system in place to make this the success it is today.

"I owe a lot of my success to my editor and mentor my sophomore year, Nathan Gajary, who showed me the basics of editing and helped me get an idea of how to put together a successful newscast," Gutierrez said." Our sports editor, Wil Stepheson, although he didn’t understand the words coming out of my mouth, ran my teleprompter for my first year and was also my 'motivational co-anchor,' and my dad watched the end results, graded me, and gave me advice on what I could do better. Lastly, of course, Mr. Janda not only gave me the opportunity to make what I consider a successful series, but also helped me when I needed it – whether that be how I should order my new stories, showing me how to make graphics, or running my teleprompter when Wil was gone."

He adds that he has learned through this process that hard work pays off and you will get what you put into something.

"There were many nights where I would go to sleep late just to make sure my show was to my liking or that it was to a the high-quality standard that I had set for myself, and once I would finish a show, the feeling of, 'Hey, I did this. This was hard work but I did it, and I’m the only one doing it.' That is a great feeling," Gutierrez said.