“Every journey begins with a single step.”

That’s what Fossil Ridge High School’s 2021 Salutatorian, Yogesh Koirala, told his peers during his speech at the school’s May 30 Graduation Ceremony. Koirala, who moved to the United States from Nepal when he was younger, may know better than most that small steps and risks have the potential to yield success and even help dreams come true, especially when you have someone supporting you along the path. 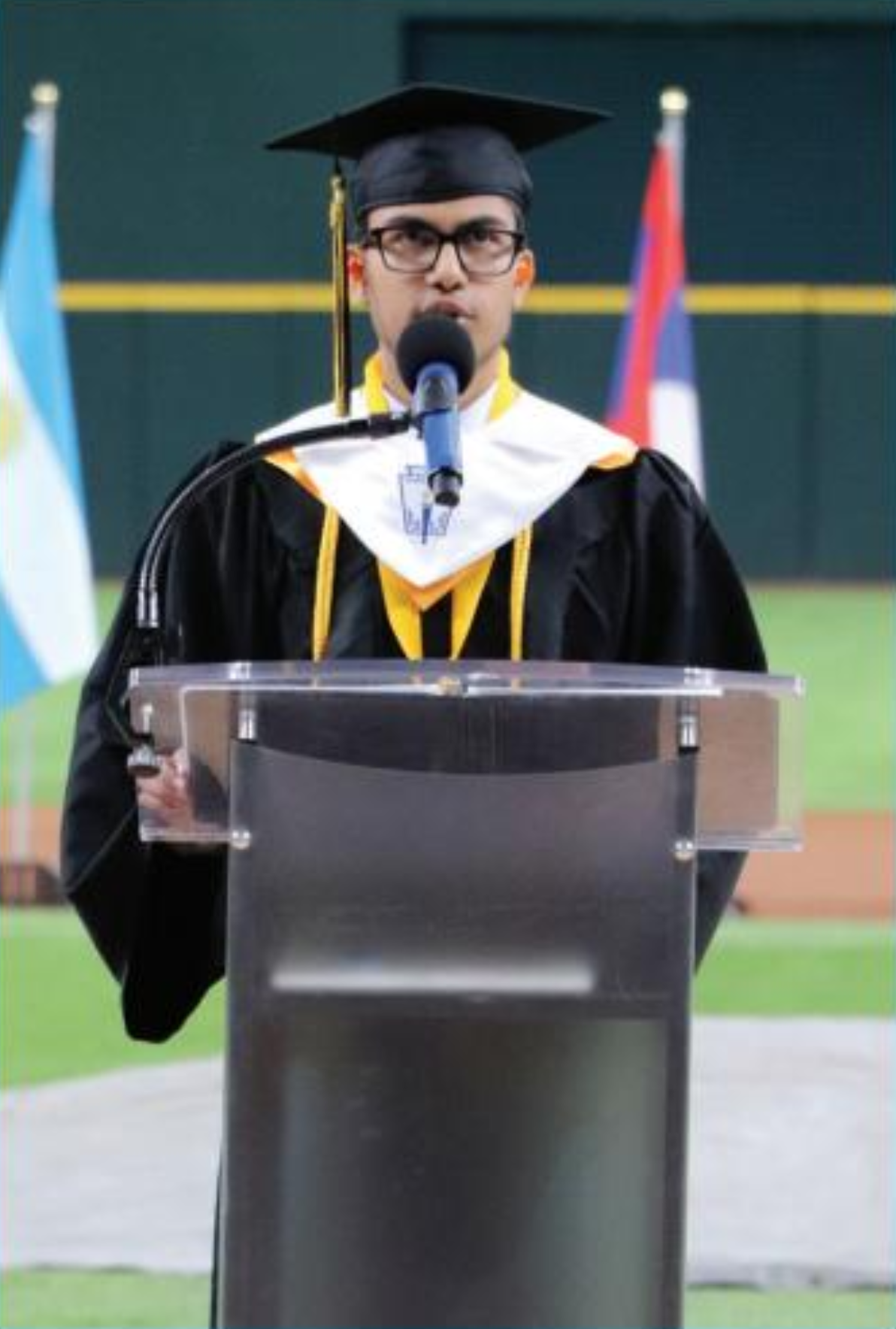 Koirala first stepped into Keller ISD in 2016. His family had moved from Nepal to New Hampshire and eventually moved to Fort Worth, at which time he enrolled in eighth grade at Fossil Hill Middle School. One of the first faculty members he met was Paul Higgins who, as an FHMS Counselor at the time, sat down with Koirala and his father to discuss his educational goals. At that time, Higgins recalls that Koirala mentioned he was hoping to take challenging classes so that he could one day go to a good college and study something in a STEM-related field.

“My impression from our conversation was that he was a bright and motivated student,” Higgins said. “At the time, Fossil Hill was the only middle school in Keller ISD with an AVID program. From Yogesh’s response, I felt the best placement was to have Yogesh in Pre-AP classes with AVID support.”

AVID – or “Advancement Via Individual Determination” – is a program focused on closing opportunity gaps by preparing all students for college readiness and success. At the secondary level, AVID focuses on writing, inquiry, and collaboration as methodologies to accelerate student progress. Fossil Ridge was the first school in Keller ISD to employ AVID, but it has since been implemented at lower grade levels, including middle schools, intermediates, and even the elementary level throughout the FRHS feeder pattern.

For Koirala – who despite learning some English in Nepal, struggled to speak fluently and engage in class through his first years in America – agreeing to embrace AVID was a crucial step to helping him adjust and thrive in school.

“The system of organization, with binders and agendas, helped me track my deadlines well and have great resources with me all the time to study,” Koirala said. “The Tutorial Process helped me clarify my confusions, while having a system of mentors helped hold me accountable.”

Koirala said AVID also gave him the chance to explore different careers, as well as providing encouragement to do community service, which he would not have done without AVID.

“Now I love volunteering in the community,” he said.

Following behind him by a few years, Higgins joined Fossil Ridge in the fall of 2020, taking on the newly created role of College, Career, and Military Readiness Coach. Each of Keller ISD’s four comprehensive high schools added a CCMR Go Center where students can stop by and get assistance with their post-secondary plans, whether it involves applying to colleges, jobs, scholarships, or any of the steps in between.

As Fossil Ridge’s CCMR Coach, Higgins got the opportunity to reconnect with Koirala. By that time, Koirala was entering his senior year ranked at the top of his class, taking several Advanced Placement courses, and demonstrating how his hard work and dedication were paying dividends in academic success. Higgins noticed this, and when considering Koirala’s background, recommended that he apply for the QuestBridge Scholarship. 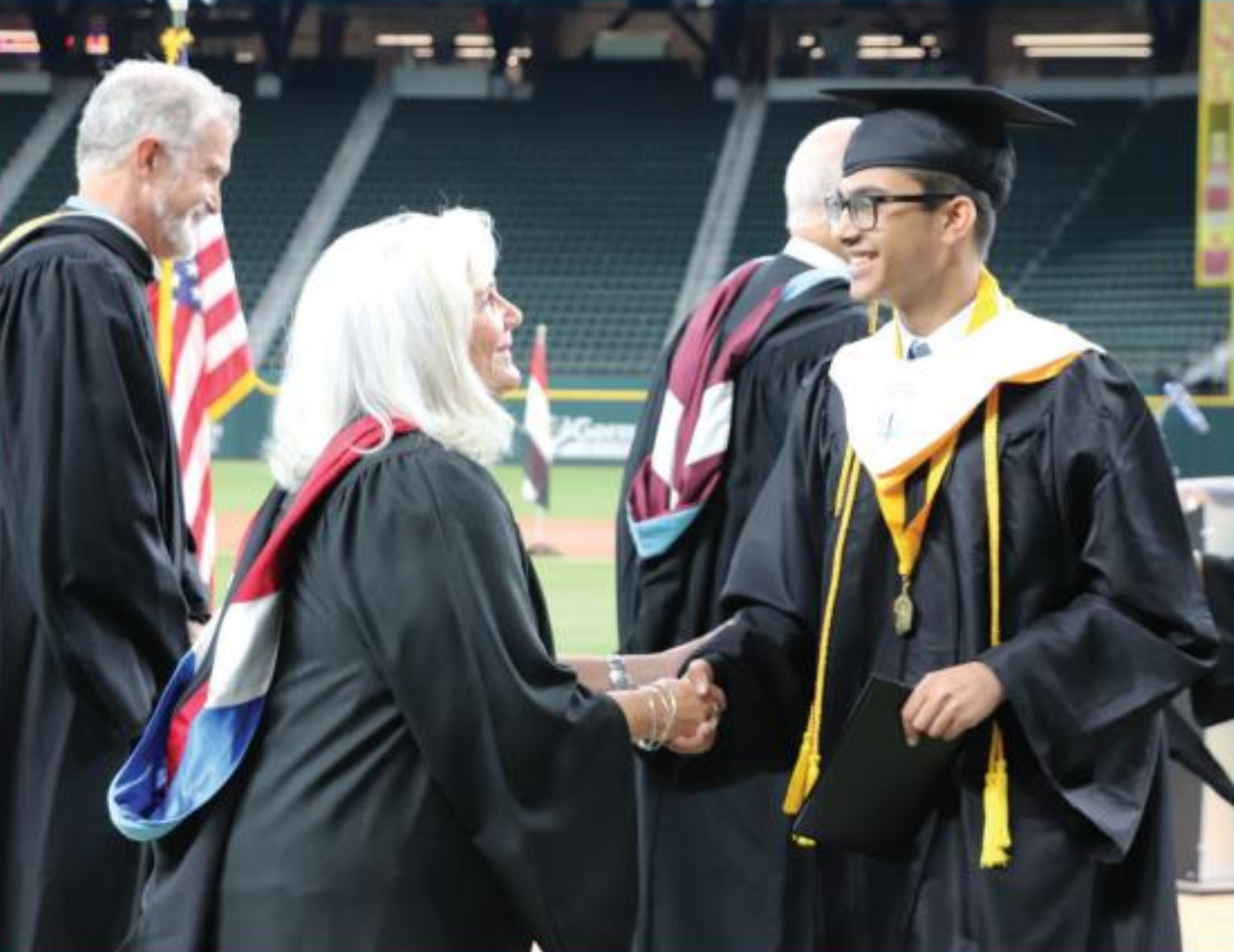 QuestBridge is a partnership program designed to help high-achieving students who may have hardships inhibiting them from reaching their post-secondary goals get paired with a QuestBridge University that offers them full tuition, fees, and travel expenses for four years of study. Higgins identified about 20 students at Fossil Ridge that met the criteria, including Koirala.

“From the start, Yogesh proved to be a very strong candidate because he is an outstanding and hard-working student,” Higgins said.

Koirala said he was at first hesitant to apply for the scholarship. However, he met with Higgins over Zoom who went over the application process and encouraged Koirala to apply.

“I explained the benefits of the QuestBridge scholarship program and the doors it could potentially open,” Higgins said. “The Zoom conversation brought me back to our first conversation in eighth grade when Yogesh shared his educational goals and dreams.”

Similar to taking a chance to engage in AVID at Fossil Hill nearly five years earlier, Koirala decided to take another step forward and apply for the QuestBridge scholarship. Much like those first steps in eighth grade, Koirla’s conversation with Higgins assured him that, in Higgins, he had a partner that was there to help him along the way.

“Throughout the application process, and even beyond, he was always there asking if he could be of any help to me,” Koirala said.

Fossil Ridge ended up having four QuestBridge Finalists, Koirala among them. However, in the end, QuestBridge did not end up pairing Koirala with any of his top schools.

After a month passed of weighing other options that might be available to him, Koirala received a notice from one of his dream schools, MIT – the Massachusetts Institute of Technology.

MIT had seen Koirala’s QuestBridge profile and was so impressed with him that they offered him a full scholarship.

“There was no way I could afford the education at MIT, so when they offered me generous aid, I was very surprised, but also very happy and excited. I blinked a few times, and even rechecked the credentials, just to be sure.”

Finishing as the academic No. 2 in Fossil Ridge’s Class of 2021, Koirala is now MIT-bound with plans to study Computer Science and Finance. He says he wants to work as a software developer, with his eyes on one day starting his own business that deals with simulation software. Even if he had never come to Keller ISD, Koirala’s hard-working attitude would have allowed him to reach those same goals. However, the same path may not have been laid out for him if he hadn’t formed that initial relationship with his counselor.

“I was very glad because I had someone there who was very willing to help me,” Koirala said of Higgins. “He is still offering me any help, should I need it. So, he has played a tremendous role in my life.”

When Koirala stepped up to the podium on May 30, just beyond Globe Life Field’s home plate he reminisced about late-night cramming sessions, encouraged others to not take friendships for granted, and thanked parents and teachers for the roles they played in FRHS graduates’ success. “It’s as important to remember other members of the faculty who have helped us come to this stage,” he added. “Though their tasks may seem minute, they’ve been fully committed every day and done the things that we often take for granted.”